Planting the Seed of Change 25 Years of Working Together for Good

Australian co-founder of Symbiosis, Dr Morris Lee OAM, stepped out of the role of CEO at the end of June 2020, after twenty-five years of working with executive staff in Bangladesh, to develop, coordinate and implement the programs of Symbiosis Bangladesh, and realising the vision of Symbiosis International. He will now move into the ongoing position of Patron of the organisation, a responsibility he describes as being like a boro bhai – older brother – to bring encouragement to those who have stepped into his very large shoes to lead the organisation forward into the next quarter century.

Morris and his wife Roslyn first moved to Bangladesh in 1977 as staff with a Western organisation that had worked in Bengal, East Pakistan and Bangladesh since 1882 and was responsible for schools, hostels, hospitals and clinics. In 1991, these institutions were handed over to relevant Bangladeshi national bodies to operate. Morris and Roslyn returned to their hometown of Brisbane in Australia to raise their young family. However, Morris found that his call to continue to serve the people of Bangladesh, who still faced so much need, remained strong.

Dr Neil Parker, also from Australia, had arrived in Bangladesh the same year as Morris, working as a medical doctor at Joyramkura Hospital in Northern Bangladesh. During his tenure, he established the Joyramkura Primary Health Care Project: a community program that provided basic life skills (such as literacy, numeracy, hygiene and nutrition) to people in extreme poverty. Morris was so inspired by seeing this program in action, that the concept became the foundation for the Symbiosis Groups which remain the focus of our core work today. 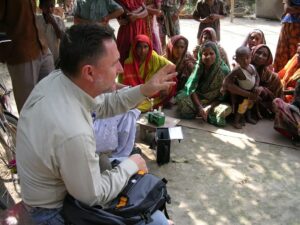 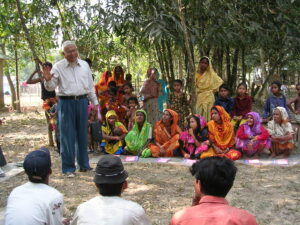 Bangladeshi national MA Akand, a friend of both Neil and Morris, proved to be instrumental in the establishment of Symbiosis. They shared a vision of establishing a process of development that was empowering, holistic, sustainable and importantly, locally ‘grown’. As co-founders of Symbiosis, they proceeded to turn that vision into a reality with the first of the Symbiosis projects in place by 1995. The poorest of the poor were brought together in groups of 20 in their villages to receive a basic education in numeracy and literacy, through which they would also have the opportunity to learn more about important health and topics of societal significance. Eventually, this program would enable many to establish their own businesses or develop skills that would better enable them to find work and earn a more sustainable income for their family.

Morris tells us, however, that when they initially shared their vision for sustainable development with people in both Bangladesh and Australia, many were extremely skeptical as to whether this program could succeed and deliver the anticipated outcomes that they were aiming for. There were many however who saw the potential, embraced the vision, and have remained dedicated supporters to this day, both financially, but importantly serving as board members, staff members and volunteers. The Symbiosis Groups now number close to 1000 in Bangladesh, each focused on the importance of increasing people&#39;s ability to solve problems as they work together for good.

One of Morris’s great joys over the years has been seeing staff whose dedication to their work has seen them genuinely respected and loved by the people with whom they work. Symbiosis in-country staff have always been chosen not only for their skills, but also their ability to relate to the people that they serve, and are often recruited from their own communities. Relationships are key to being effective when working in conservative cultures, particularly when approaching sometimes complex traditional issues through awareness-raising sessions during functional education, such as child marriage, safer child birthing and respect for women. The distinctive philosophy of Symbiosis balances a strong commitment to cultural sensitivity with an understanding that tradition and culture should serve people and not the other way around. It has always been critical that staff were imbued with a strong understanding of this philosophy and that they reflect it daily in their work.

Dr M A Rahman, the present Country Director was appointed in 2014 after Mr Akand passed away in 2012. Lisa West-Newman who has previously lived and worked in Cambodia for ten
years has stepped into the role of CEO in Australia. We thank and honour Morris and Roslyn for their work and sacrifice over the past 25 years and acknowledge their selfless devotion to the people of Bangladesh through Symbiosis that has resulted in such a significant legacy for us to continue the work.

Working Together for Good